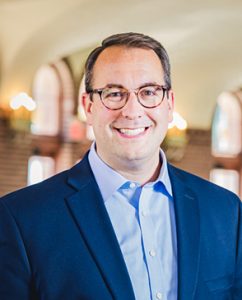 Gerald Edmonds, former Minister of Music at The Moody Church from 1982-2009, went home to be with Jesus last week on August 11. He was a true worshipper who led our church family to greater appreciation of God’s majesty, holiness, and love as he guided our music ministry for so many years. He personally impacted many young people who have also served the Lord in music and pastoral ministries all over the world. He was a godly mentor, a valued colleague, and a great friend. He will be dearly missed.

Not many people are gifted in music as he was. He was a formidable musician, composer, and conductor. But even fewer have that combination of passion for excellence that is totally captivated by the awareness that it is all for the glory of God. He often described his contribution in ministry as “just a boy offering his loaves and fish for Jesus to use, and the Lord uses it to feed the multitude.” To God be the glory. — Pastor Tim Stafford

Jerry was a gentleman, a wonderful colleague, and of course, an outstanding musician. He always strove for excellence and was committed to doing the most he could for the Lord. The last time he led the church choir, he took the baton and handed it to Tim, with the joy of knowing that he’d done his best and now the future belonged to the next generation. That class act characterized his life. He was a faithful, humble servant to all. — Pastor Emeritus Erwin Lutzer

Would you join me in lifting up his wife Patty, daughter Debbie, and the entire Edmonds family as they mourn and celebrate Gerald’s life well lived?

You are loved, more than you know.