I can hardly type fast enough to keep up with all that I want to say! Another NH Graduate was launched over the weekend, and it may have been our most beautiful graduation ceremony yet. I will probably say that about all of them, but that’s because each and every woman who has completed our program and is launched back into the community is special. Graduates show grit, and faith, and resiliency. They are clothed with strength and dignity like the woman in Proverbs 31. And they are carefully and thoughtfully taking the next steps back into our community, leaning on the new tools they have to live out the life God intends for them. This is exactly what happened over the weekend with our newest graduate. I am so inspired by her. 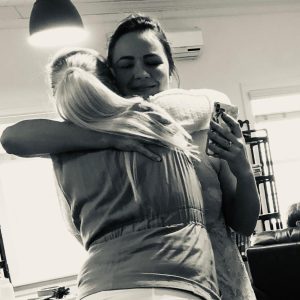 Our graduate said, “On two hands I can count how many programs I’ve been through. I finally gave myself a chance and finished one.” Her mom was in the back of the room (next to her grandparents, her co-workers, her therapist, her sponsor…talk about support!) with tears streaming down her face. Trafficked since a teenager, they both recognized that this graduation was the first positive “event” they’ve celebrated together. High school or college graduations, homecoming or prom, wedding or baby showers…they’ve never had one of those. This was the biggest milestone they have shared together.

Trauma held this woman captive for so long. She would find herself paralyzed by fear and doubt. She couldn’t imagine a life without abuse and substances — that was her normal. Now, she’s been sober for over a year and half. She has the tools to regulate her brain and her body when trauma flares back up. She walks by faith and has a new trust in Jesus and His promises to her.

As she gave her “graduation” speech, she noted how she felt stronger spiritually, physically, emotionally-more than she ever has before. She said, “My mom’s not driving streets looking for me.” She looked at the other residents in the room, women in the middle of their programming, and said, “Don’t leave before the miracle happens.” She is known for inspiring other women at NH with this advice; one of our other residents admits that when she was first told this, it convinced her to stay and stick it out. This other resident is next in line to graduate!

I’m so struck by what it took for this woman to graduate. The physical change she went through is alone enough to make you pause and shake your head at what trauma can do to one’s body and appearance. And the number of people who have prayed for her and given financially to NH so she would have access to the support she needed — it’s almost unfathomable. I feel safe to say that the mother of this graduate would write each of you a personal note of gratitude for your support … because now she has her daughter back.

Welcome this woman back into our community, would you? You won’t know who she is or recognize her if you run into her…but that’s ok. Just know that a woman who lived in darkness at the hands of a trafficker is now living in light because of the hands of a Savior. We are all better because a woman like this has received the help she needed. A new leader has been launched.